On Friday, I woke to the sound of falling rain, and I thought it would be a good day to drive downtown and duck into the Concinnity Deli on Front Street, and breathe in the essential aromas of coffee, sweet breads, and black bean soup. If a cup of Joe and chocolate-chip banana bread wasn’t enough to brighten my mood, the vinyl record spinning soft rock behind the counter would surely do the trick. Truth be told, I favor Concinnity for two reasons: their fresh menu and their sense of nostalgia. A few weeks ago, Ginger, the owner, invited me to bring my most cherished vinyl record, Amnesia (Pousette-Dart Band 1977), to the deli some morning when I could linger and enjoy the music as I remembered it. Of course, to win this invitation, I had to tell her the whole story of Pousette-Dart Band, and why I missed playing their ballads on a record player and hearing their wistful sound. As an artist – a culinary artist – Ginger understood, and that’s why her invitation meant so much,  but I didn’t bring Amnesia to her deli right away; I waited for the right occasion. When the rain came on the eighth of February, I knew it was the right time to pour a little of PDB’s tonic for the soul – music that would carry me back to a sunny day.

The lyrics of Amnesia took me back forty-two years to a concert on the Hill in Worcester, Massachusetts. The band was from Boston – Cambridge to be exact – and I’d never heard of them until that spring day. While introducing the group, the lead singer repeated the name John more than once, and I remember thinking it was the best name for guitarists in a rock band. (I’ve always been a fan of the Beatles and John Lennon.) Later, I learned the guitarists names by heart: Jon Pousette-Dart, John Troy, and John Curtis. Of course, there were percussionists and a guy on keyboard. And after reading the album cover, I can include their names: Jeff Teague, Kenneth Buttrey and Mike Utley. PDB earned a multi-album deal with Capitol Records in the mid 70s because it was one of the most popular touring bands in New England. Amnesia was its second album, and it put PDB on the Billboard Album Chart. In a fickle world, Amnesia would prove to be the band’s most memorable soundtrack. On side one, there are two songs that have left an indelible impression on nostalgic souls like mine: Amnesia and Fall on Me.

Do you remember the American drama series Lost? From 2004 to 2010 – before reality television buried creative storylines – we followed the survivors of Oceanic Flight 815 after their plane crashed on a mysterious tropical island in the South Pacific. The story was peppered with the supernatural and science fiction, and it captivated our imagination and fueled our emotions for an hour every week. Wistfully, Fall on Me was the song that kept repeating during episode eleven of season two. I recognized the music and lyrics immediately. And just like playing the vinyl record at the Concinnity Deli, I allowed the soundtrack to conjure up feelings of nostalgia:

If you’re gonna fall
Fall on me.
And if you’re goin’ down,
Hold on to me
I can see the sorrow in your eyes
I can feel your heart wondering why

The cold, the snow, and sometimes the rain, of February lends itself to introspection; it drives us inside. Whether we spend our winters in Bath or Belfast, Portsmouth or Dover, Boston or Worcester, Middlebury or Rutland, Mystic or Newport, winter is a time to reflect. And that’s why the coffee houses, movie theaters, and lunch spots are still busy long after December and the holiday rush. We like to gather, watch movies, read books and talk about deep rooted feelings. Music has always been a great connector – in time and in love.

Preparing for stormy weather, my husband and I decided to see Mary Poppins Returns, starring Emily Blunt and Lin-Manuel Miranda, in January. I saw the original Mary Poppins, starring Julie Andrews and Dick Van Dyke, in 1964 shortly after its premiere and two years before my tenth birthday. As a die-hard romantic, I still have the soundtrack album; however, the music in Mary Poppins Returns is new because it’s a continuation of Mary’s story, not a remake. Don’t worry. It’s equally as charming in every way. And the fact that this 2018 minted film gives us a glimpse of two iconic actors, Dick Van Dyke and Angela Lansbury, also fills our need for something old and something missing. I've always believed it's important to remember the history of art. Once you hear Mary Poppins' lullaby, Where have All the Lost Things Gone, you’ll understand why the magic of Disney endures, and you’ll hear your own story in the words: 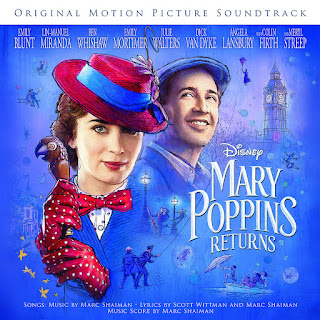 
I’m not sure why, but the theater was rather empty when Joe and I went to see Mary Poppins Returns. Anticipating a crowd, we had ordered our tickets online. When we entered the theater fifteen minutes early to find a good seat, we discovered that only about a dozen seats were filled, and that didn’t change. We also noticed that our fellow moviegoers were about our age; they were not children; they were not young adults. At the end of the movie, many of us applauded, and I even heard a few genuine sighs. For a couple of hours, Emily Blunt and Lin-Manuel Miranda had taken us on a fantasy tour of London, and they had left us with lighter hearts and a renewed faith that good things happen, and they won’t be lost.

It’s still February; it's still cold, and I need a little music to keep warm. Today, I think I’ll look for an old-fashioned record player on eBay and purchase it. If I’m lucky, it will arrive before March. In the meantime, I’m going to dust off my Fleetwood Mac album and bring it to the Concinnity Deli. Maybe I’ll see you there. I hope so because the best part about going downtown is the possibility of running into friends, especially in the heart of winter. And speaking of friends, I have to reveal that my favorite Pousette-Dart Band album, Amnesia, belonged to my college roommate, so when I graduated, I lost that sound until I found it in Lisle, Illinois, at Dave DeMarco’s. Dave was my husband’s best friend at work; a Dartmouth grad and connoisseur of obscure New England rock bands – among many other things. We attended one of his parties, and PDB was playing on his stereo. As soon as I told him my connection with their best-selling album, he gave it to me, and that was the start of a wonderful friendship. Here's to short winters and long friendships! 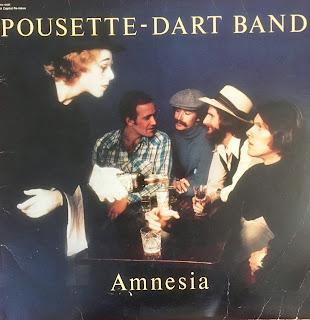