Do The Lobster Stroll!

For high school seniors, looking out of a classroom window in early May is like watching George Lucas’ 1973 coming of age drama, American Graffiti, on the big screen. You can almost hear the engines of those fast cars inviting Curt and Steve, played by Richard Dreyfuss and Ron Howard, to take a thrilling summer ride. Remember that All-American drive-in restaurant where those young California dreamers used to hangout? Well, that flashy drive-in reminds me of Fat Boys on Bath Road! Funny, as a high school teacher, I am also waiting for summer and root beer floats. However, unlike my seventeen year-old students, my idea of a wild summer is sitting under a sun umbrella at Popham Beach and reading Elizabeth Strout’s newest novel. On a perfect beach day, I will take a short, cool walk to Fox Island at low tide for a better view of the Seguin Lighthouse. If the tides and weather permit, I‘ll stay out on those rocks until sunset before slowly walking back to the sandy beach to take the easy ride home to Bath.

A few weeks ago, Joe and I had a chance to take a spring walk along a deserted Popham Beach. We only passed one other person on that chilly day. Like us, he was enjoying the peace of a quiet beach still in winter mode.  In the off-season, beaches seem to keep secrets, and, believe it or not, I am trained in unlocking secrets! We found a lobster trap that probably washed up on the beach during one of the February storms.  I wonder who is looking for this carefully designed trap, and where did the “too small to be caught” lobster go after he slipped out through the back door? Before the summer crowds arrive, beaches can be mystifying! Ironically, I saw Popham Beach for the first time on an April day two years ago, and it was love at first sight! In one salty moment, Joe and I decided that we wanted to spend the rest of our lives in Maine! Two months later we bought our Maine house, and we have been doing our happy, lobster stroll ever since!

Catch a lobster if you can because they are key to Maine’s identity. One of the earliest stories in the maritime history of Maine is the arrival of an English ship, The Archangel, on the shores of Monhegan Island on May 17, 1605. A member of Captain George Weymouth’s crew, James Rosier, reported the first official Maine lobster landings: “And towards night we drew with a small net of twenty fathoms very nigh the shore; we got about 30 very good and great lobsters…which I omit not to report, because it sheweth how great a profit fishing would be…” (A Guide to Lobstering in Maine, DMR). Today, Maine’s lobster fishery is probably the oldest, continuously operated industry on the North American continent. It is also the largest lobster fishery in the United States. In 2012, Maine’s lobster catch was 127.2 million pounds, the highest catch since record keeping began in 1880.  Last year’s catch was not a record-breaking harvest, but lobstermen paid their bills and celebrated Maine’s healthy supply of lobsters!

It’s easy to see why so many commentators like to say with a wink: “You know you’re in Maine when you see lobster traps, buoys and other lobster materials decorating homes, restaurants and retail shops.” Simply stated, lobsters are enormously popular in Maine with good reason. Lobstering has fueled Maine’s entrepreneurial spirit since the 1840’s, but long before English explorers arrived at the mouth of the Kennebec, Native Americans were catching lobsters with their hands and using them to bait their fishing hooks and fertilize their fields.

In colonial times, lobster was considered “poverty food” because it was abundant and easy to harvest. Indentured servants, who had paid for their passage to America by pledging seven years of servitude, were forced to eat lobster so often that some rebelled and demanded that their contracts be altered to limit lobster dinners to no more than three times a week. In sharp contrast, when I was twenty-one and responsible for paying my own bills, I refused to eat lobster because it was the most expensive item on the menu!

History books tell us that Maine’s lobster fishery was endangered by the rise of the canning industry from 1840 to 1880; however, conservationists responded with guidelines to preserve the population. The first lobster pound appeared on Vinalhaven in 1875, and many others followed. These pounds  became the genesis of Maine's modern harvesting practice. As the canning industry collapsed, the fresh lobster industry grew. In other words, Mainers realized there was a need for conservation to save planet Earth almost one hundred years before it became a global mission! Today, harvesting lobster is a highly regulated business, but residents who enjoy fishing as a pastime can obtain a license to catch a few lobsters if they can!

Maine lobstermen probably harvest and sell more lobsters than anyone else in the world. Brooks Trap Mill, a family owned and operated business since 1946, is the largest manufacturer of lobster traps in the state. According to an article in the Bangor Daily News (2013), former Senator Olympia Snowe recognized this stellar company for its invaluable contribution to Maine maritime history with an official notation in the congressional record in 2012. Before Michael Ojala, a Finnish immigrant, opened his first business, a sawmill on Rockland’s waterfront, he decided to Americanize his name by changing it to Brooks. In Finnish, “ojala” means a fast flowing brook, so Brooks was a good translation and a positive choice. Ironically, in Spanish “ojalá” means “I hope” or, more traditionally, “God grant.” Okay, I am a Spanish teacher, and as fate and Bath would have it, I also have a little Finnish blood in me on my paternal grandmother’s side. I have digressed, but in addition to highlighting the Finnish connection, I have to recognize God’s grace in Maine’s lobster fishery and Michael Brooks’ success story. In 1949, with the help of his sons, Michael moved his sawmill closer to his family’s home in Thomaston. Despite a few setbacks, Brooks Trap Mill expanded from sawing trap stock to making wooden traps and later, in the 1980’s, wire traps. In fact, under the direction of Karl Brooks, Michael’s son, the company custom-designed wire cutting machines that enabled it to produce high quality traps quickly. Almost 70 years later, Karl’s three children, Mark, Julie and Stephen, now own and operate three warehouses and four retail locations, including Portland Trap, Brooks Marine Supply (West Bath), Downeast Trap (Jonesboro), and Brooks Trap Mill. From Nova Scotia to Connecticut, Brooks’ traps are catching lobsters. Even though I am not a commercial lobsterman, I would like to visit the Brooks’ store in West Bath to walk among the giants of the industry! 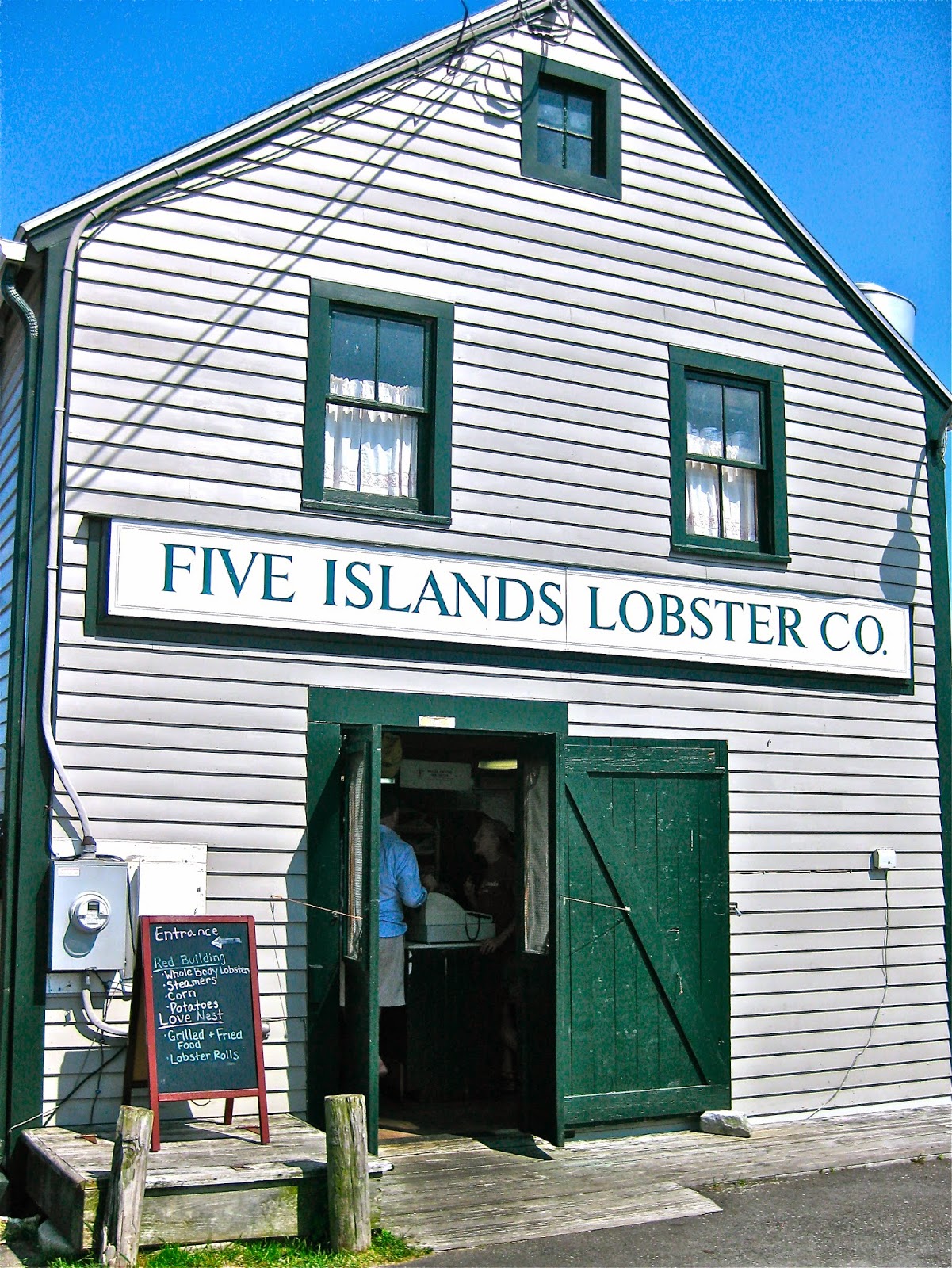 If you appreciate lobster, but never catch them, I recommend a visit to Five Islands for a close-up look. Whenever Joe and I entertain friends “from away,” we offer to drive them over the Sagadahoc Bridge to Georgetown. When we arrive at the edge of Sheepscot Bay, we stop to admire the cold blue water and the pretty boats that are waiting for their crews. We also take a minute to snap a few pictures of the scores of lobster traps sitting on the dock. After we fill our souls with all that natural beauty, we invite our guests to order a lobster lunch at Five Islands Lobster Company. I’m convinced the lobster tastes better at Five Islands because you eat outdoors, and the friendly servers are willing to give you advice on how to eat a lobster fresh out of the pot. A visit to Five Islands is the best education you can buy Downeast! On our way back to Bath, we usually stop at the Doubling Point Lighthouse to make a wish along the Kennebec and say thank you for another great day in Maine! 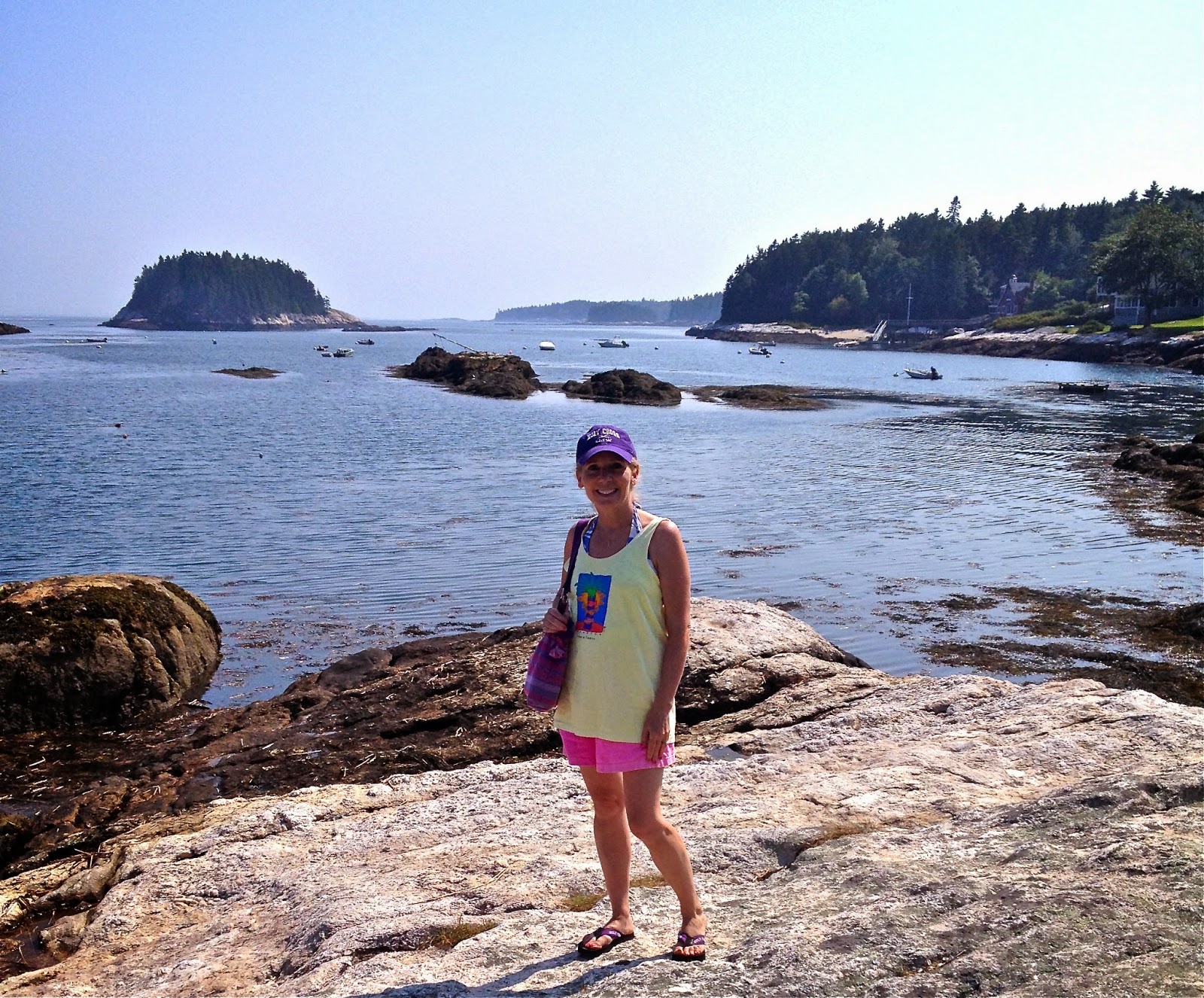 When day is done, I have come to realize that the only difference between my seventeen year-old students and me is forty years! Everything changes and everything remains the same. When May turns to June, it's time to go out and play.

The teacher has left the building! She is probably out doing the lobster stroll!