The Birds, the Trees, and a Love Called Maine 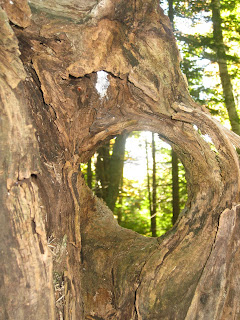 Sometimes the sun, the stars and a blood red moon align to create a perfect day for taking a walk in the woods, and sometimes you’re lucky enough to be in Maine when that happens. Last Sunday I was blessed with the opportunity to hike up Morse Mountain with my true love.  Even though Joe and I have owned our home in Bath for two years, we didn’t know about Phippsburg’s hidden gem, The Bates-Morse Mountain Conservation Area, until a few months ago when my Wednesday morning coffee friends suggested we “take a hike!” and raved about the views from Morse Mountain’s lofty overlook, which is halfway between the rod iron gate at the beginning of the trail and Sewall Beach at the end of the trail. My clever friends, however, did not elaborate on the many wonders we would find at all of our stopping points along the way. When you walk among birch trees and tall pines, it’s nature's beauty that fills us with hope, and when you’re surprised it’s twice as powerful! 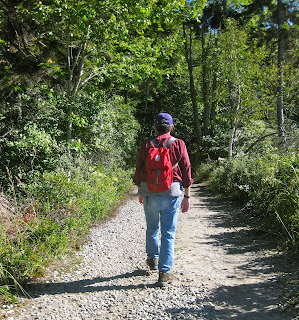 As we drove along Small Point Road on that spectacular September day, we almost passed by Morse Mountain Road. With only an ordinary, blue street sign to mark its existence, it’s a miracle that we spotted it in time to turn left and proceed to the small parking lot less than a quarter mile up the road. Miraculously, Joe and I pulled into the second to last available spot at 1:15 in the afternoon. Clearly, we were not the only couple who wanted to spend a glorious Sunday outdoors breathing in Maine’s apple crisp air.  Hoping to catch every ray of sunshine, we immediately set off down the paved road with our trail map in hand, and our snacks and camera tucked inside our red backpack, which Joe bought for our first hike together in 1977 when we were dating. A few minutes later, we came to the first fork in the road, and I had to repeat Yogi Berra’s sage advice: “When you come to a fork in the road, take it.” (I was and always will be a fan of Yogi Berra.) 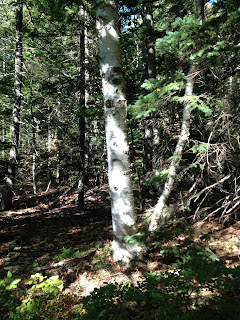 Less than a mile into our four-mile hike, I snapped a picture of a whimsical birch tree. Whenever I see a birch, I smile, and my mind’s eye turns back to my childhood. In the presence of a birch, I see secret notes carefully handwritten on the back of a sheet of white bark; I see miniature canoes artfully made to resemble native American, birch canoes that used to glide smoothly along the rivers of the northeast, and I see young boys swinging on branches like Robert Frost described in his poem, Birches. One solitary birch tree can lift me up toward the sky and let me dance with the ospreys, humming birds, and piping plovers. A forest filled with birches will transport me to another time and space where everything seems all right. If only for a moment, the swinging branch of a birch tree can steal all of my worries away. As a young student, Robert Frost’s poetry encouraged me to play, explore, and live a more daring life. It’s funny how a walk in the woods on a bright, sunny autumn day can make you see more clearly and reflect on all the choices you have made.

In Birches, Frost describes the immeasurable value of a playful, white tree in a serious, green forest:

When I see birches bend to left and right
Across the lines of straighter darker trees,
I like to think some boy's been swinging them.
But swinging doesn't bend them down to stay.
Ice Storms do that… 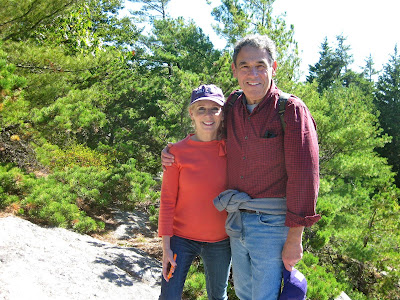 So was I once myself a swinger of birches.
And so I dream of going back to be.
It's when I'm weary of considerations,
And life is too much like a pathless wood
Where your face burns and tickles with the cobwebs
Broken across it, and one eye is weeping
From a twig's having lashed across it open.
I'd like to get away from earth awhile
And then come back to it and begin over.
May no fate willfully misunderstand me
And half grant what I wish and snatch me away
Not to return. Earth's the right place for love:
I don't know where it's likely to go better.
I'd like to go by climbing a birch tree,
And climb black branches up a snow-white trunk
Toward heaven, till the tree could bear no more,
But dipped its top and set me down again.
That would be good both going and coming back.
One could do worse than be a swinger of birches.

Joe and I snapped a dozen pictures of birch trees as we followed the path to Morse Mountain’s scenic overlook. They were simply irresistible. The hike should take no more than two hours, but we wanted to stay and play longer. Luckily, we met a friendly couple, not unlike ourselves, and they offered to take our picture. It’s rare to see Joe and I in the same photo, especially when the backdrop is towering pine trees! Our fellow hikers directed our attention to Mount Washington on the distant horizon. We were astonished, and Joe told our new acquaintances that he had attended high school in New Hampshire and had climbed Mount Washington many times. When we asked the couple where they went to high school, the woman told us that she was born in Bath, but her family had moved while she was still in grammar school. As fate and Bath would have it, she and her husband both had lived on Long Island in New York at different times, and I had lived there, too, but now we all call Maine our home. We marveled over the random connections four strangers could make, and then we went our separate ways, but first we snapped a dozen more pictures, so we could long remember the view from the top: the winding Sprague River, the peaceful beach at Small Point, the dense green foliage, the bright blue sky and Mount Washington in far away New Hampshire!

A car passed us when we returned to the main road to continue our hike to Sewall Beach. At first, we were surprised, but then we realized we were on a private road near the home of the St. John family, the founders of the conservation area. Today, Bates College and the Small Point Association cooperate with The Nature Conservancy and the Maine Audubon Society to preserve the plants, wildlife and natural communities that inhabit the area, including the nesting sites of piping plovers and least terns, both endangered species of birds which nest on the bare sand.  Bates College is conducting environmental research throughout the 600 acres that are framed by the Sprague River, the Morse River and the upland edge of Sewall Beach.

When we finally stepped on to Sewall Beach, one hour after beginning our afternoon trek, we were greeted by a crystal clear view of the lighthouse on Seguin Island, one of my favorite places in all of Maine. It was low tide, and the white sand stretched out for as far as we could see. The sea breeze was hitting our faces with a good punch, so we decided to look for shelter between some large rocks. When we found a sweet spot for two, Joe took out an apple from our old backpack and began to slice it with his antique pocketknife. He handed me every other slice; I felt so loved. As I looked out on the beach, I spied a young couple chasing each other across the sand. He caught her; she touched his chest with her hand; he lifted her into the salty air and spun her around; she threw her head back and laughed; he set her back down; she tossed her hair; he took off his baseball cap and stole a kiss, and then she grabbed his hand, and they started to run back toward the wooded path. Sunday afternoons have always been perfect for a date in the woods.

Before leaving the Bates-Morse Mountain Conservation Area, Joe and I paused to gaze for a while at the flat salt marsh, which seemed to expand infinitely from the edge of the woods. The Sprague River divided into scores of small veins in front of our eyes, and the water flowed and glistened through all of them. I thought I saw a hawk fly overhead; Joe thought he saw an eagle, and we both thought of our dear friend, Bill, who was killed in a car crash recently in Oaxaca, Mexico on his way to witness the late summer bird migration. Bill was a quintessential bird watcher and nature lover. A former Peace Corps volunteer, Special Forces Army veteran, and Chicago architect, Bill retired to Oaxaca about ten years ago to watch birds, cultivate gardens and support local artisans. Our friendship spanned thirty years, and within those years our appreciation for art, nature and philanthropy multiplied by thirty! Next Friday we will celebrate Bill’s life at a memorial service in Chicago. Our daughter, Katie, will sing a selection of Bill’s favorite Mozart arias and popular songs. The two that will make me cry are Come to my Garden from The Secret Garden and Somewhere Over the Rainbow from The Wizard of Oz ( The book by L. Frank Baum, which inspired the musical, was actually written in Chicago in the Fine Arts Building where Bill had his office.) Joe and I had hoped to show Bill and his wife Mary, who is also our cherished friend, the amazing beauty of Maine’s mid-coast. If Bill had been given more time, I know he would have enjoyed identifying the countless birds that fly over us in Maine. Lifted up on an eagle’s wing, he is flying with the angels now. 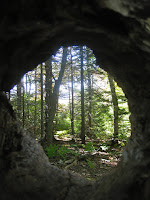 Upon leaving Morse Mountain at four o’clock in the afternoon, Joe and I were unusually quiet. We tend to talk a lot. Well, I tend to talk a lot, and Joe seems to be genuinely listening most of the time. Truth be told, the natural beauty of God’s creation has a peaceful, calming effect on most souls. It’s good to take a walk through the woods and swing on the branch of a birch tree. That branch can carry us up to the heights of heaven and gently set us down on earth again to live more fully and love more dearly.
Posted by Bath Time at 11:49 AM No comments: Links to this post