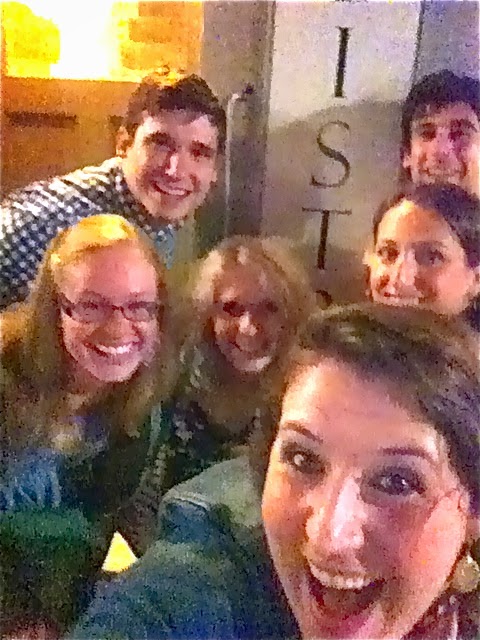 "Forget your troubles, come on get happy. You better chase all your cares away."
These "Get Happy" lyrics were immortalized by Judy Garland in the MGM musical, "Summer Stock." In March, on the weekend of Blarney Days, "Get Happy" could be the theme song for Maine's Cool Little City! From the Shamrock Sprint 5K to the "Go Green" Parade up Centre Street; from the Blarney Ball at the Winter Street Center to the Irish Soda Bread Baking Contest at Now You're Cooking, the people of Bath will be singing and dancing their cares away from March 14th through March 17th and beyond! Some people like to say Mainers are getting old, but they haven't heard about Blarney Days. You have to be young at heart to play Tug O' War at City Hall and enjoy poetry readings at Cafe Creme. Only those who sleep like babies can consume caffeine until late in the afternoon! Hearts are definitely beating strong in Bath, and they suggest that this small gem in the county of Sagadahoc could be a real life Shangri-la! At times Bath seems almost as mystical as the Shangri-la depicted in James Hilton's 1933 novel, Lost Horizon. I have only read three novels twice, and Lost Horizon is first on that short list. As a young reader, Lost Horizon was my Harry Potter and the Socerer's Stone, and I came to believe in Shangri-la like children today believe in Hogwarts Castle! Perhaps Lost Horizon captured my imagination because it suggested that an earthly paradise where people live long and active lives could exist. Even before I had wrinkles, I considered the notion of "forever young" worth pursuing. After discovering Bath, I believe youthful exuberance must be a Maine state of mind! Truth be told, no one seems old during Blarney Days! Bath Time is like an injection of youth, and the community of Bath, though old in years, is puddle-jumping young! People make music in Bath, and that is positive proof of life! 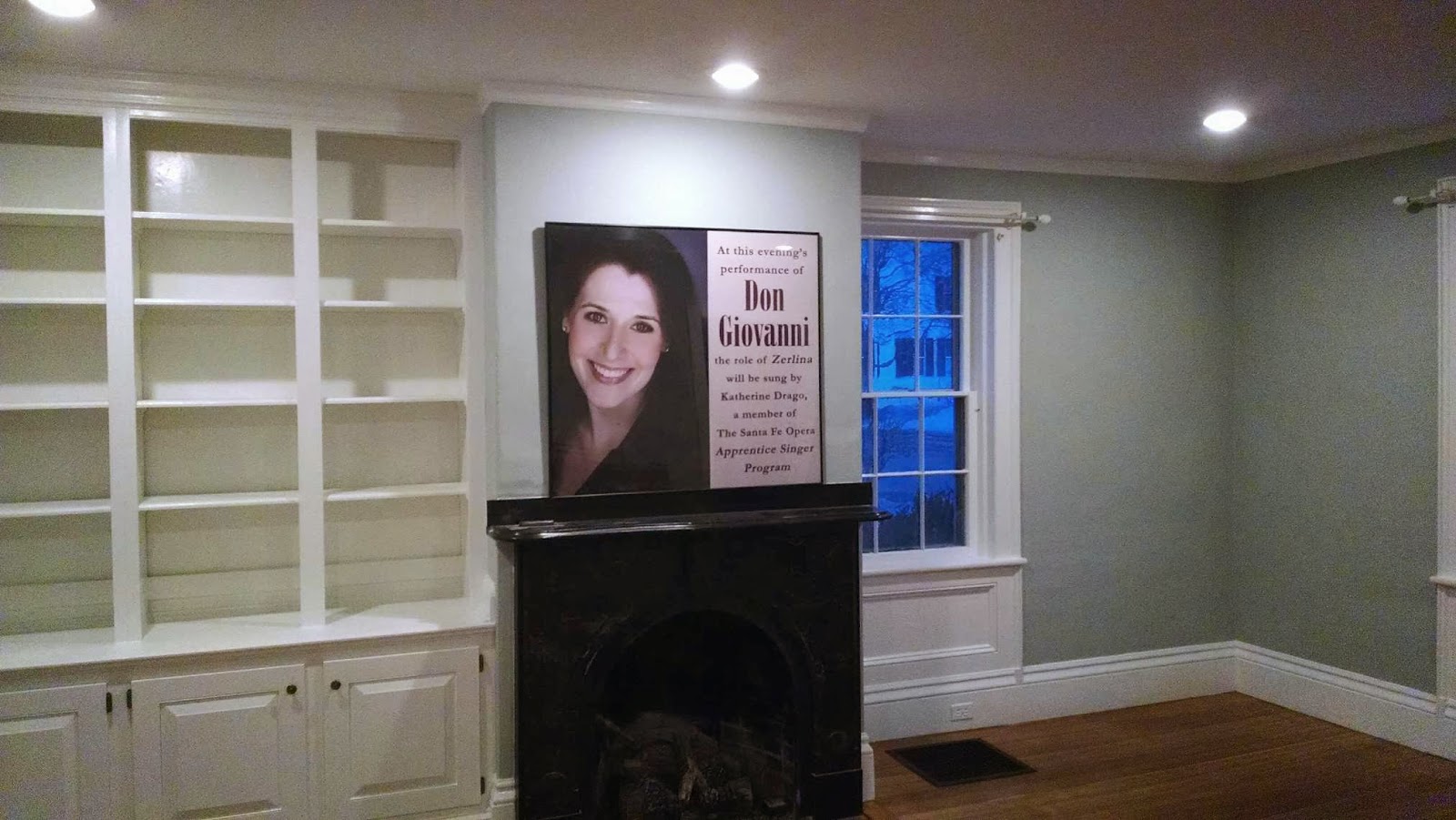 Joe and I have three adult children. Is that an oxymoron? It probably is,  but wise men say that children keep us young. If that is true, then Joe and I are five times blessed: Katie, Matthew and Lauren, Mark, and our Maine house in Bath! We really bought our house on Washington Street with our children and their future families in mind. Like the premise of  "Field of Dreams," we hope that "if you build it, they will come." And the magic seems to be working! Our daughter Katie will be celebrating her birthday later this month in Bath. She and her boyfriend, Scott, have been planning their itinerary for months. Obviously, young in mind and body, they will be in constant motion. They will trek to L.L. Bean to replenish old hiking gear; they will brunch at Mae's Cafe, and they will splurge on a divine dinner at Solo Bistro. The main event, however, will be Saturday night's concert, appropriately named "The Natives Are Restless,"at the Chocolate Church Arts Center. Katie is a singer and a performer, so I was not surprised that she would choose to spend her birthday at a concert featuring some of the most popular bands and solo artists in the region. Without a doubt, Katie will be tapping and clapping in pure delight because for Katie singing is like breathing. You have to make music to stay alive! In Bath, Katie will connect with many talented musicians, and that means she will visit often! The fact that all of our adult children are planning trips to our Maine house proves that dreams really can come true in Bath!


Ironically, it was Katie's love of music that led us to Maine. On behalf of Carnegie Mellon University, Katie attended the Bowdoin International Music Festival in August of 2012 and found the music enchanting; she also found Maine's natural beauty and  historical flavor inspiring. She called us and simply said, "You would love this place!" The next winter we booked a weekend getaway at the Inn at Bath, and it was love at first sight! We looked at five houses that weekend just to explore the city and admire the architectural details of some graceful and historic homes. As fate and Bath would have it, it was the last house, the Greek Revival on Washington Street, that invited us to stay, play and be happy. There was a piano in the living room and bookshelves filled with music, art books and novels. Our realtor, Patty, told us the former owner had passed away the previous summer. Patty also told us the woman used to sing at the church down the street, and we could clearly see her fondness for music, travel and art in every room. The house felt just right for my musical, travel-loving family. We visited two more times before making an offer, and Katie returned to Bath to take a look, too. Of course, she hoped the piano would stay, and it did. There was a beautiful antique mirror above the fireplace in the living room, however, that did not convey with the house, so Joe and I made a creative decision. Over the elegant mantle, we hung a large, framed poster of Katie, which the Santa Fe Opera had used a few summers ago to announce Katie would be stepping into the role of Zerlina for the final three performances of "Don Giovanni." And in a Shangri-la, mystical moment, the Maine house became our forever home.

P.S. As for that short list of novels, Shane and Don Quixote de la Mancha, the Spanish version, are the only other novels that I have read twice. I must be drawn to woeful heroes who ride horses and try to right all the wrongs!
Posted by Bath Time at 9:28 AM 1 comment: Links to this post

The Bugle Boys of Company B 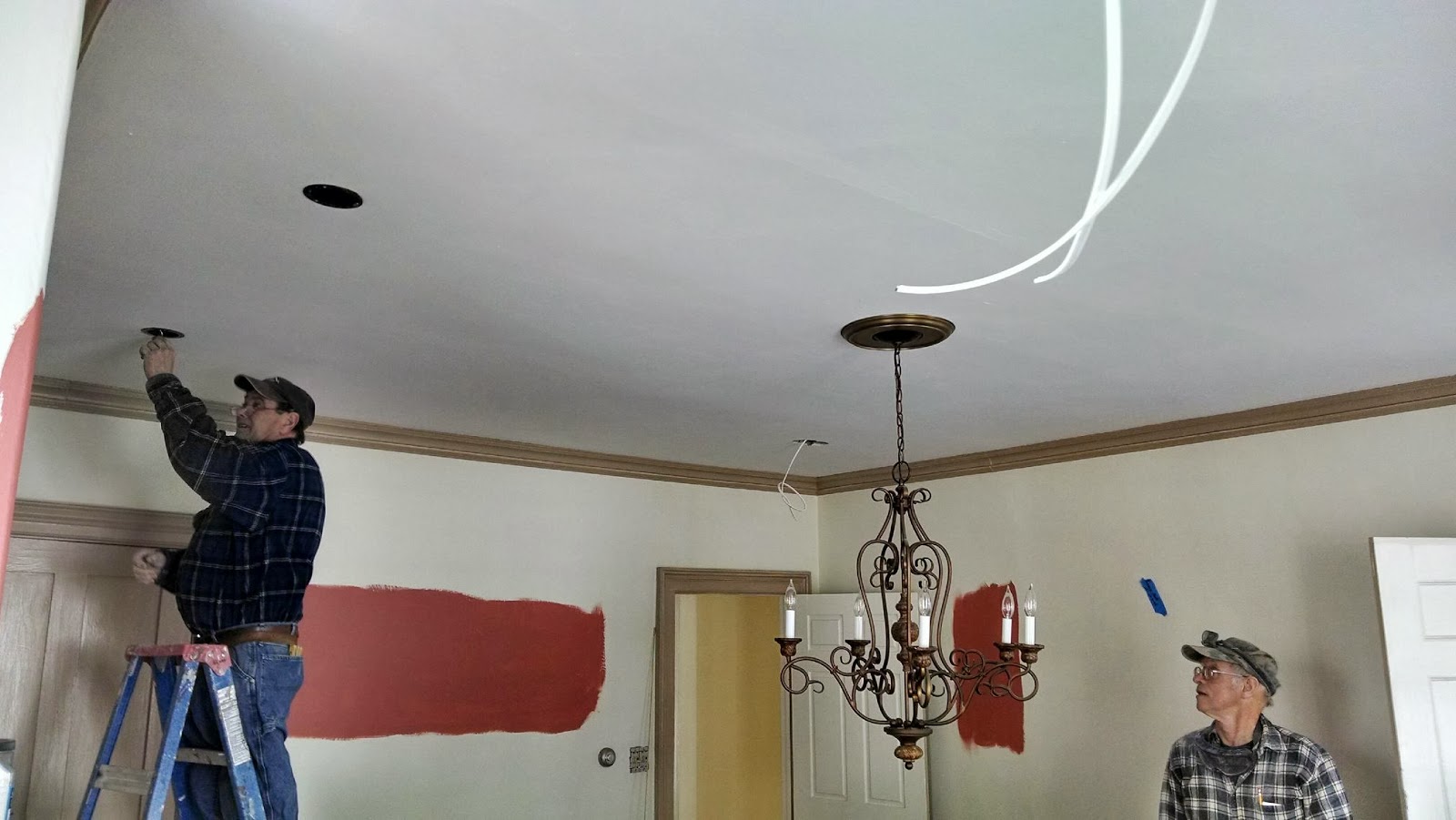 The March winds are blowing reveille, and it's music to my ears. I can hear the bugle boy play "a root, a toot, a toodli da toot" as if I were listening to Bette Midler singing "Boogie Woogie Bugle Boy." You can hear the notes from far away, and just like company B, Bath and I are waking up. I can hardly wait for spring because Washington Street has the prettiest flowers in May and June. Wait! Let's not rush because time can never be repeated! This is the first March that we have owned a home in Maine, and we want this March to last 31 glorious days. We are off to a good start because John Ater and his bugle boys arrived on time to revive our living room and dining room. Now they look bigger and brighter than ever before. Our electricians, Kenny and Dickie, put canned lights in the ceilings, and voila, the mood changed to happy!

I'm convinced that lighting has the power to add grace to any room, but before you can turn up the lights on Washington Street, you have to find electricians who know old houses, and that is why I thank John Ater so often and so loudly. John introduced us to Kenny and Dickie, who bear an uncanny resemblance to Dean and Jerry. No, not Ben and Jerry. I am referring to the comedy team of Dean Martin and Jerry Lewis, who lit up movie and television screens from 1950 to 1956. Well, Kenny and Dickie, men of Company B, are almost as funny and equally as endearing as Dean and Jerry. Yes, they are! They have been friends since high school, and now they work together like a well oiled machine. Kenny talks real fast while Dickie waits and punctuates the  pauses with a word or two. After Kenny repaired some old wiring in our basement last July, I began to trust and admire his skills. Kenny in turn trusts and admires Dickie, the master electrician. In many ways, their enduring friendship exemplifies the best of Bath. It's very clear that the shipbuilders who have resided here for hundreds of years know how to build strong houses as well as strong boats. According to Kenny and Dickie, that's why this cool little city has been able to move so many historical homes from one location to another within the city limits. Blessed with an abundance of skilled craftsmen, Bath makes the impossible inevitable. And when something breaks, you can be sure that someone very capable will come to fix it! And chances are, they will entertain you with a few urban legends. 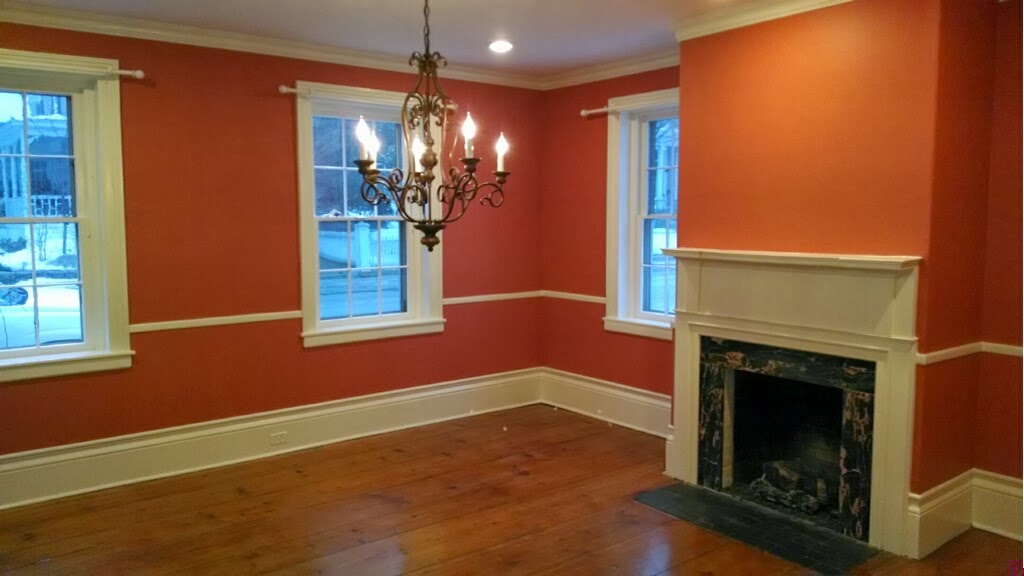 We spent forever deciding on paint colors. Polka dots of spring like color seemed to appear on every wall. It was definitely a Goldilocks experience. The first color was too blue and the next color was too green, but Tranquility was just right for the living room, and Wildflower was just right for the dining room. Both colors wake you up in the morning with a tickle. Our Maine house is ready for spring, and we have two newly painted rooms to fill with comfortable chairs and couches, pretty photographs, local art, and of course, books and music! This old house is awake, and Joe and I are so ready to dance in the living room, cook in the kitchen, serve dinner in the dining room, read the newspaper in the sun-room and laugh with friends and family in every corner, but at the moment our Maine house is rather empty. You might even be able to hear an echo in the dining room. 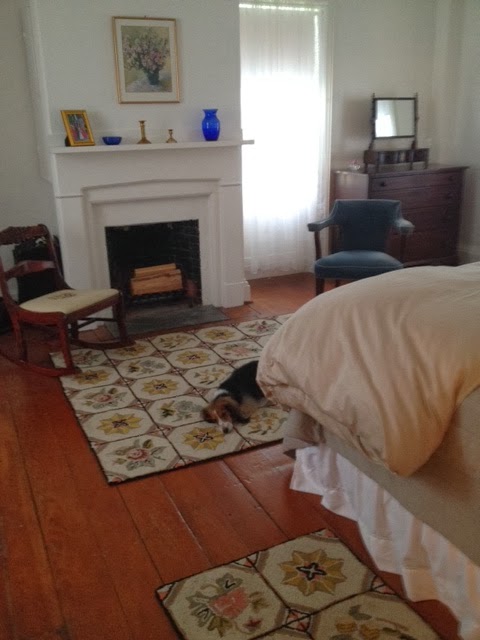 The kitchen and sun-room, however, are beginning to feel like home, and although we haven't painted the rooms upstairs, the bedrooms all have beds! In fact, the master bedroom is feeling quite lived-in with an antique dresser and my grandmother's rocking chair. The Dash and Albert rug is definitely the heart of the room. It was expensive, but it was "necessary" to make our house feel cozy. Maine is cold in winter, and sometimes it's cold in the spring and fall, too, so a rug brings that snuggle to the center of the room. We found our "Flower Box" design at the Ornament shop in downtown Bath. I must admit I never walk down Front Street without stopping at the Ornament. The owner, Gayle Hunt, is truly a visual artist. The Ornament's display window invites you in, and once inside you want to stay for a while and touch and see all of the lovely garden accessories, antiques, linens and lamps. Within Ornament you will also find Betsy Pare at her Maine Shades' workbench. Betsy is the Mary Poppins of lamp shades! With a little fabric, a scissor and glue, she saved my mother's old lamp, a family heirloom, that now adorns our nightstand. With Gail and Betsy working creatively at the Ornament, Bath time is always in good hands, and springtime promises to be magnificent. I can hear the winds of March, the bugle boys of Company B, blowing reveille! 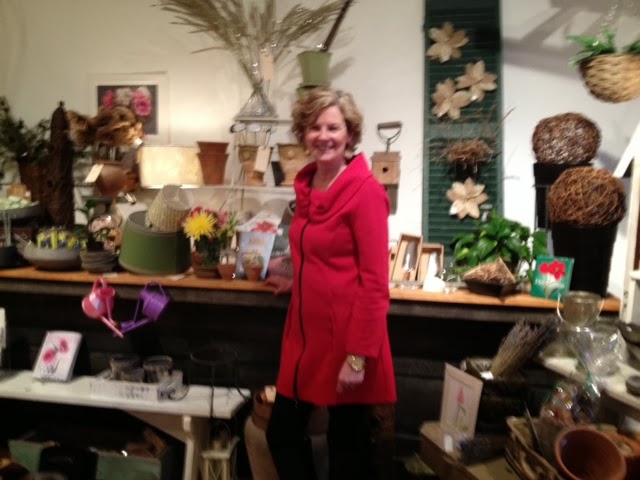 Posted by Bath Time at 7:57 AM No comments: Links to this post