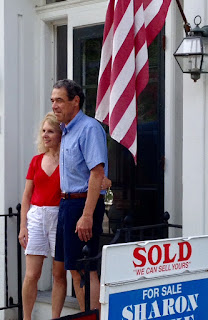 When my husband and I purchased an 1823 Federal-style colonial on Washington Street, I was inspired to write a blog called Bath Time Society, and to write a novel about Bath’s shipbuilding history. And if you believe love inspires art, I probably fell in love with Bath the first time I spied that antique house. In Spanish, they call that un flechazo, or love at first sight, but most love stories usually have a beginning, a middle, and an end, and my story is no exception. As time goes by, it seems only fair to reveal more of the story. Upon arriving in Bath, I immediately recognized that Maine’s City of Ships was blessed with a plethora of architectural gems, and I was lucky to visit five of them on a single day with Patty Sample Colwell, a beloved realtor.  When I stepped into the entranceway of the last house I would visit that day, a winding staircase with an elegant, harpsichord-like bannister lassoed my heart and pulled me into the kitchen. And the spell was cast! That central room, which had lots of wainscoting, an island with a butcher-block top, a large dish cabinet, and two pantries, was simply charming, and I knew Joe and I could be happy there. Spacious and bright, the Greek-revival-style kitchen was probably added in the 1850s and updated in the 1920s. The appliances were dated (the handles were held together with duck tape), the countertops were Formica, and the floor was covered with red linoleum, but the space was brimming with potential. Joe and I were not naïve. We had bought and sold more than one old home, and we knew home renovations always took more time and money than expected, but we started to think about this one particular old house a lot! In fact, our thoughts and our heart kept returning to its 1823 staircase drenched in afternoon sun. Four months later, on June 14, 2013, we closed on our historic home in Bath. And first on our to-do list was to update our kitchen without sacrificing its charm! We promised ourselves that we wouldn’t rush; we would do it right!

Now, we’re at the middle of our story. Five years have passed, and our kitchen is now stunningly beautiful and highly efficient. And thanks to the talented crew at the Kennebec Company – James, Heather, Karla, Amy, Wendy, Greg, and Les – it’s still charming! At first, I worried we might be sacrificing our kitchen’s character for new appliances and stone countertops, but the Kennebec crew convinced us that their design would blend new with old so seamlessly that it would look as if those handsome improvements had always been there! That may seem like an impossible task, but the Kennebec Company delivered exactly that, and they did it sooner than expected! How do impossible things happen? Well, my experience with renovating old homes has taught me that they happen step-by-step, and only if you gather the best people around you. Last June we started our quest for the best by attending Sagadahoc Preservation Inc.’s annual house tour. On the tour, we met James Stewart, the owner of the Kennebec Company, at a newly renovated kitchen in an antique colonial on the corner of Oak and Washington Streets, and we quickly learned that James’s company was responsible for both the design and the cabinets. We were definitely impressed with that kitchen’s glow, and our imagination took flight. Could the Kennebec Company help us to refresh our kitchen? As a realist, I doubted that James was related to Jimmy Stewart, the star of Frank Capra’s 1946 iconic drama/fantasy, It’s a Wonderful Life. But as an optimist, I secretly hoped he would someday transform my kitchen with a few good cabinet makers and lots of stardust. Later on the tour, we met Heather Krausse, one of the KC designers, at an historic home on North Bath Road, and that fortuitous meeting sealed our fate. We decided to invite Heather over to our place to “take a look.”

As fate and Bath would have it, Heather made several visits to our house last summer, and those planning sessions continued until early December when she presented us with detailed drawings and a scheduled starting date of February 27, 2018. From the beginning, it was easy to work with the Kennebec Company. In their amazing showroom, housed in Bath’s historic Customs House at one Front Street, we were able to touch and feel the granite, marble, slate and soapstone countertops, as well as their handsome cabinets. And I probably stopped by too often to test the pretty knobs on their doors! Heather assured me that choosing the right hardware would be one of the last decisions we would have to make, but I was still anxious about all the decisions that a kitchen update would entail. As we all know, when you’re in a candy shop, it’s hard to choose just one piece of candy. Browsing in the Kennebec Company’s showroom was a lot like being lost in a candy store! But the KC crew was willing to share their knowledge even before we committed to the project, and that helped immeasurably. We are especially grateful to Heather because she listened carefully to our deep-rooted hopes before she presented us with a plan, and we continued to tweak that plan until our project was completed on the twelfth of April – weeks ahead of schedule! From the beginning, Joe and I had expressed our desire to preserve the sunny charm of our kitchen, but three wishes were driving us to renovate: stainless steel appliances, a white farmer’s sink, and stone countertops. A few months after we closed on our house, John Ater’s crew of painters and tradesmen had torn up the old linoleum, painted the old cabinets, sanded and refinished the floor, and updated the lighting, but now we wanted to finish the job they had started, and it would take an army of skilled people. First, Heather recommended Agren in Topsham for state-of-the-art appliances, and that was good advice. By Thanksgiving, we had a new refrigerator and a Wolf oven, and neither were put together with duck tape – the handles were perfectly attached! Heather suggested that we wait for the dishwasher until our plans were finalized, but she urged us to go with a cabinet door, and we agreed. The next step was to order that coveted farmer’s sink, and a new faucet. And then we had to decide on the best stone for the countertops. That was the hardest decision of all. But my experiences have taught me that the best way to make a good decision is to seek the advice of experts. 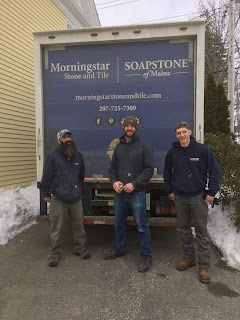 Heather recommend Morningstar Tile and Stone Company in Topsham, and I followed her lead. At Morningstar, Lisa Flynn became my guiding light. Together, we looked for a stone that would compliment my kitchen colors – dove white, hollingsworth green, and wildflower. At first, I looked at the granite, but after much deliberation I decided on Fantasy Brown Marble – honed, not polished. On my quest for the right stone, I learned that each slab is unique. I had rejected Fantasy Brown on a previous scouting trip, but by the time I returned with Heather and my Benjamin Moore color wheel, three new slabs had arrived, and there was a touch of wildflower, my accent color, in each. It was a match. And when I brought Joe in the next day to confirm the decision, he said yes! He also agreed that the hand-made tile Lisa had suggested would serve as a fabulous backsplash for our stove. That day, even though I dreaded the demolition of our old kitchen, and the dusty work that would follow, I got excited about our BIG project!


You cannot start a kitchen renovation without finding a contractor you trust. For that reason, it was a blessing that the Kennebec Company introduced us to Andrukaitis and Mosher. Dave Andrukaitis and Tim Mosher kept us calm and moving forward for the whole project - four weeks and one day. Dave helped with the planning and demolition, and he installed a safe ventilation system for our new stove, and Tim was the finished carpenter. This talented duo managed to install beautiful new cabinets, a porcelain farmer’s sink, a new butcher-block counter, a deluxe oven, a quiet dishwasher, a new shelf, wainscoting, wood work, and more, in the heart of a 19th century home. They were phenomenal problem solvers and consummate craftsmen. I would recommend them to anyone who needed a project completed with the best possible outcome. Naturally, I’m glad our kitchen re-do is done, but sometimes I miss their smiling faces, especially at lunch time! Tim had a habit of sitting on his shop-vac and wheeling around the kitchen as he ate his salad, and our dog, Penny, liked to follow him!

If I didn’t sing the praises of Kevin Pontbriand, the tile guy at Morningstar, I would be remiss. I truly believe our backsplash is a work of art. Kevin’s skill with tile is worth the tile’s weight in gold! Morningstar is a forward-thinking company. Their employees have a vested interest in the business, and everyone seems to have a specialty. A crew of three Morningstar men installed our Fantasy Brown countertops, and they worked well together. I believe the youngest man was new, and the other two were mentoring him like kind-hearted professors. I liked all three of them, and would be happy to recommend them to anyone in need of a new countertop!


It’s only fitting that John Ater literally put the last brush stroke on our fresh, new kitchen. When Les Williams came to refit the original cabinet doors on our island with new nickel knobs and hinges (our kitchen island was only slightly modified), he noticed John’s crew had missed a spot, and John insisted on touching up that spot himself! In 2013, John was the first one we called to help us make our antique house feel like home; in 2018, he answered our call again and helped us finish our kitchen revival! There are many craftsmen (and women!) in Maine, and Joe and I believe we have met some of the best. This blogpost is my way of thanking them. XOX